I’ve just completed an excellent two day workshop at Ardington School Of Crafts run by Laura Boswell. An introduction to Japanese woodblock printing. An art form I love but I have never tackled before.

I started with an image of pine trees falling into the sea on the end of Furzey Island in Poole Harbour. I photographed it last week and even did a sketch of it in charcoal whilst sitting cross legged on the roof of my boat. 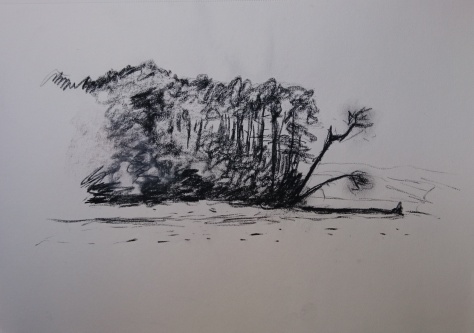 Laura took us through the stages of breaking the design down into blocks which would build up the image. These are carved on both sides of the wood block and coloured using horse hair brushes, watercolour paint and rice paste.

The blocks are printed onto damp paper, using a baren to burnish the back. I produced several multicoloured images and a final, fairly rushed one just in blue, which is very traditional.

It’s a fascinating technique. These results aren’t that great, but they are a starting point. Hokusai, here I come… 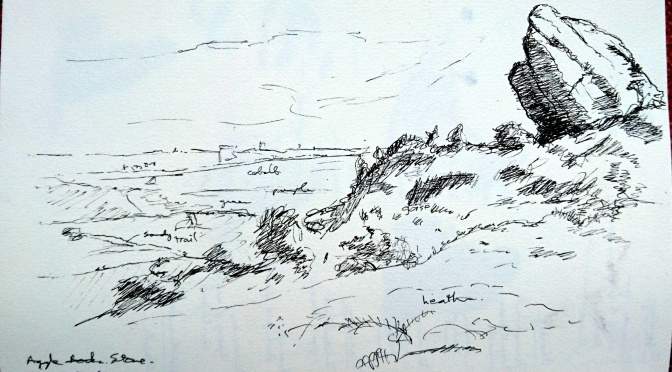 This is another little landscape which has taken up a lot of time. I’m not sure even now  if it is finished. The Agglestone rock is a crumbling sandstone outcrop above Studland heath in Dorset. I hiked out to it on a hot morning in August. I took a photo of what is a beautiful scene. There is something irresistible about isolated ancient rocks.

I sketched the view with the intention of painting it, so there are some colour notes scattered about.

The first painting was on the wrong shaped board and I was never that happy with it.

I stated all over again on a long, narrow canvas. This has been repainted at least four times. I’m still not sure about the skyline to the right of the rock. The heather colour is very difficult to achieve but this looks the most convincing so far. I wanted a feeling of a deep landscape, and I think that works.  I shall leave it for now, and possibly for good.

I have been struggling over two small acrylic landscapes based on sketches I did last summer. I think this one is just about done. I have completely repainted it about four times. I’m very pleased with the distant hills, quite pleased with the forefront grassy dunes and the sunny lady. Not certain about the sea, but this is so much better than it was that I think I will stick with this. The other landscape still needs a bit more tinkering.

After six months of work, I think I’ll call it “The Red Hat”

I managed to get down to my boat in Poole harbour at last a couple of weeks ago, coinciding with hot, sunny weather. A very rare coincidence this year. I also managed to do some simple pen sketches from the boat and whilst out walking over the heathland. I have tried turning a few of these into small acrylic paintings, with varying success.

This very simple sketch was quite tricky, as the boat was at anchor and swinging around in the breeze. What I wanted to show in the painting is that the sandy peninsula was caught in bright evening sunlight, whilst the background was quite shadowed. Only partly achieved. 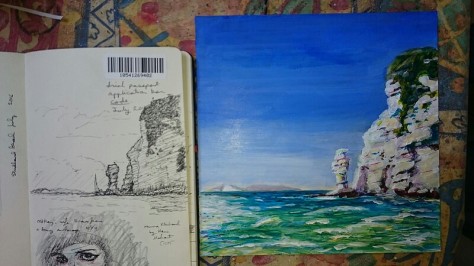 A sketch of a chalk stack called Old Harry’s Wife. (Old Harry himself is far bigger and just out of sight around the corner). Very bouncy anchorage, with the Isle of wight on the horizon. The painting is on a very smooth art board, which I didn’t like all that much. The paint tended to drag off too easily. 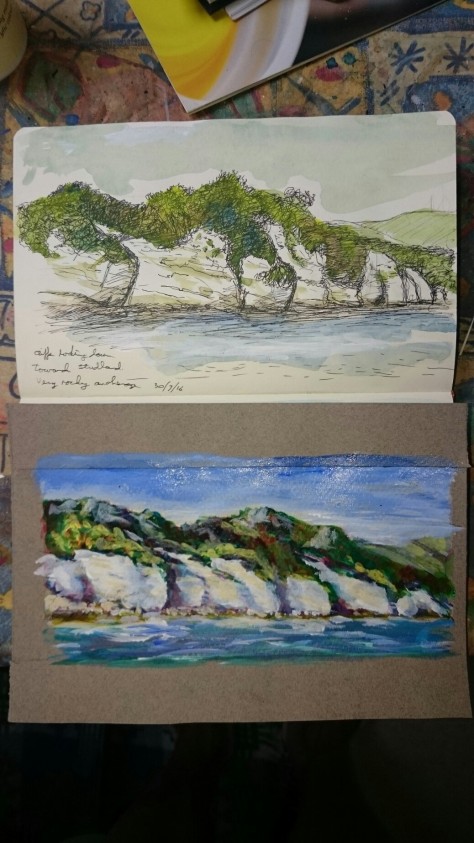 The ink sketch was from the same anchorage as Old Harry’s Wife, looking towards Studland village. I coloured the ink sketch in at home, and then produced the acrylic based on that. More an impression rather than an accurate representation.

A quick sketch on Studland beach, which I worked up a couple of weeks later.I find the sea and sand really hard to paint. Once I had the basic layout laid down, I realised I had my viewpoint far too high, so I added the dune in the foreground to make it look balanced. There were far more people on the beach than I show, and I left off all the little tents and windbreaks as I think they are just ugly. It is a most beautiful beach, especially on a hot sunny day. 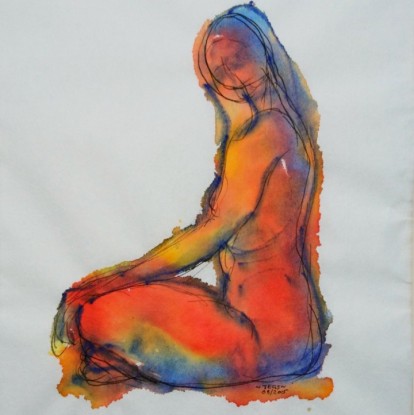