I decided I needed a change from naked women. Well one does after a while. So I’ve tackled a townscape with acrylics. Working from a photograph, which I don’t usually enjoy, but this was largely an experiment. I chose a photo I took in Orvieto in Umbria, to contrast with the watercolour one I did the other week, based on the tutor’s photo. I’m very pleased with the outcome, so thought I would just go through the sequence of painting again as an aide memoire.

First, fresh paints and a decent quality canvas. This I scrubbed with burnt sienna as a mid-tone base to start from. The photo is on the tablet.

Then I sketched in the basic shapes in charcoal. This muddies the  acrylic at first, but it soon disappears. The beauty is that you can just rub it off with a tissue and keep redrawing until you get it right. 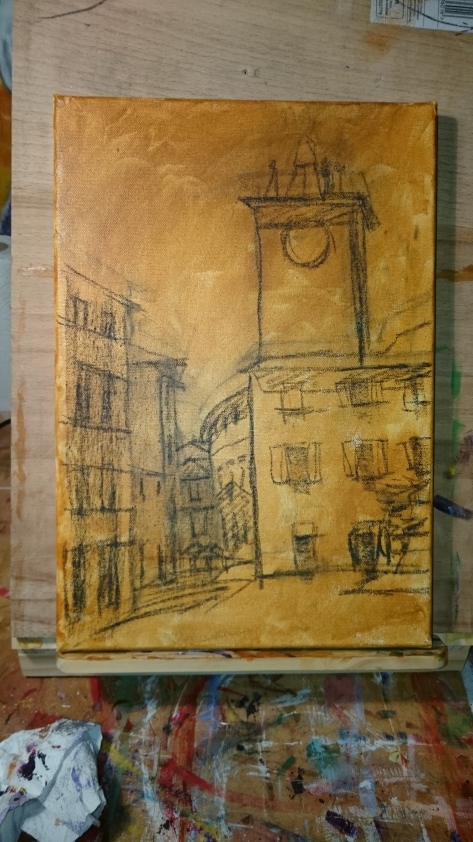 Then I started blocking in the negative spaces as I’ve done before. The sky was the obvious one here, and it is a really good way of starting. Beginning with the main subject just leads to unbalance. Then I roughly blocked in the main areas of colour.

I then worked up the main façades in some detail. My verticals tend to lean. I really should measure them and draw them with a ruler. It took me ages to correct some of this. The strong light and shade is challenging. You want colour, not grey. I tended to use thin purple for shadows.  A lot of this will be over-painted later, it is just there to get the structure right

Then a lot of work on the other façades and trying to get the perspective of the lane going away and down into the town. Lots of work means over-painting many times. This is so much easier than watercolour, where you have to get it right first time, or it is wrong. Some of the highlights look a bit fierce, but you need them to give texture and life to teh picture. They tone down when more detail is added.

Finally a bit of a big jump, the light is worked on in the lane to make it look bright and sunny way down the bottom. Figures were added. The two on the left were in the photo and were really catching the sun. They make the whole composition look much more three dimensional. The other groups of figures in the lane were kept very simple, just to aid the perspective. I added a waiter in the door of the cafe to relieve the black space. He also helps to counteract the lean…

The two girls on the right were added to fill the space. They are a couple I have been working on for months in a painting of my newly built boat,  which you can see in the background of the  first picture. I thought they should put some clothes on whilst in town.

I’m very pleased with this as a first townscape. Far from perfect, but it looks jolly in the kitchen.

It is interesting to see the stages that a painting goes through, where changes are made and ideas come up. I took a series of photos of this one, which shows something of the process.

This was the initial charcoal drawing from a life class, done about a year ago. I’ve always liked it, but it was just an exercise. I like the closed pose. 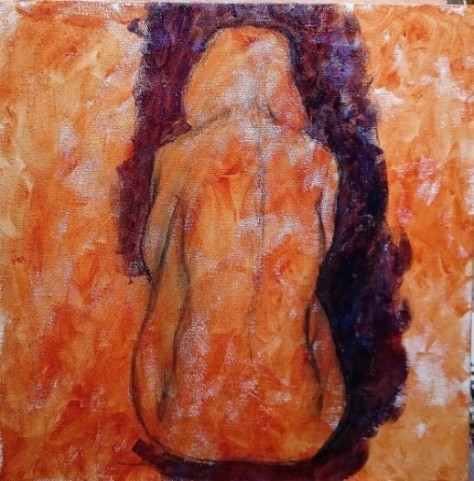 I bought a cheap square canvas and then wondered what to do with it. First stage was to give it an interesting, non-white base, which is easier to paint on. I used burnt sienna acrylic paint. I dug out the old drawing and thought I would work out up into a painting. I had no idea of the context of the finished painting at all at this stage. I sketched the pose in charcoal, rubbing it out several times, until it was a good copy of the original. Then I started painting the negative space around the image. This often works much better than starting with the subject itself. I just used a dark, purplish colour to give me a background.

Before I completed the background I added the towel the model had be sitting on. I liked the look, so thought a waterside/swimming setting might work.

As the canvas was square, not a conventional rectangular one, I decided to formally split it in half with a waters edge. I was thinking of a beach at first.

I quickly decided it was a boarded pontoon edge, rather than a beach. That meant that the boards’ edges would clearly show the perspective, and it avoided painting the change from sea to sand, which is really difficult.

Having given her a basic location, I worked up the surface of her body. Only some light and shade needed adding to the basic burnt sienna base coat to give her some modelling. This was the first point at which I actually painted her body. It was all background up until now.

I thought she looked a bit forlorn, so gave her something to read. Initially is was a newspaper, stretching both sides of her head. That looked ridiculous, so I overpainted the right hand page and turned the left had page into the corner of a book. I also added a mug of coffee. I worked the towel up to look like one of the Turkish hamam towels I use. I also wanted it to seem that things were going on outside the boundaries of the picture, so I added the mooring rope, going up to a boat which is outside the right hand edge. I blocked in her shadow, so she didn’t seem to be floating over the boards.

The final image, just about. I do tend to keep fiddling with paintings for weeks after they should have been finished. I painted out the white bookmark in her book, as I kept seeing it as a cigarette! I made the edge of the red cover catch the light, as you must have some red somewhere. I’ve added some reflected light on her shaded side, a pair of sandals and someone’s wet footprint. I have also put in some vague reflections of boats, masts, whatever, which are just across the water from her. Again, indicating that things are happening all around.

I thought of adding a pile of clothes on the left, but firstly, that is really hard to paint, and secondly, it is such a lovely sunny day, who would want to wear anything anyway?

I’ve finished my acrylic of a girl on the dockside. They are my sandals, my swimming towel and a mug I got for Christmas! I added a book to give her something to be doing and it gave a spot of bright red. My general painting rule is that every picture needs a bit of red in it.

Interestingly the colour of her hair and much of her body comes unchanged from the burnt sienna that I scrubbed onto the canvas to give a working background to start from. Once I had picked her out by painting in the dark surround, she didn’t need much alteration.

She’s come on nicely from the original life class sketch.

So my first two acrylic jobs have been to do with painting red hair.

I’ve had an acrylic hanging in my boat for a couple of years, based on a life sketch I did a few years ago.

I love the picture, but I’ve always known it wasn’t quite right. The line of her back is far too hunched up. So I brought her indoors and started doing something about it (one of the beauties of acrylics and oils is that you can keep on working on them almost indefinitely.)

I’m pleased with the altered back and shoulder. She looks much more human now. I also worked a bit on her hands abs twisted her bottom around slightly.

This all required some adjustment to her hair. The model had very red hair so I stuck with that, and thought it would be nice to make more of the hair. Much more. I got a bit carried away.

I realised at this point that red hair is really hard to paint. For a start, it isn’t red, but it is very hard to say what it is. So I thought I would digress and do a little study of just a swatheof red hair. An old friend who has moved to New Zealand has red hair, so I copied one of her Facebook photos. Initially I was just going to do the hair, so I started with a green background, to emphasise the colour, whatever it is.

I really liked how that looked and decided to carry on with it as a full portrait. It seemed a shame just to stop at the hair. The first portrait I have painted for many, many years and I’m very pleased with it, even though she is tiny.

I’m still little wiser as to what colour Red hair really is, but I’ve given my boat girl even more, and I shall put her back on board later this week.

I’ve had a busy of productivity, partly linked to getting a new acrylic “stay-wet ” palette. Makes it easy to just pick up a brush for a few minutes at any time. This is in fact the third thing I have worked on in the last few days. I’ll comment on the other two layer.

I’ve taken a life class drawing from about a year ago, and started working out up on a canvas. No especial idea, but starting out by colouring the canvas, drawing on the figure outline and then blocking in the negative shapes around her.

I’mnot sure of the context yet, but I’ve added the cloth she was sitting on, which may become a towel. 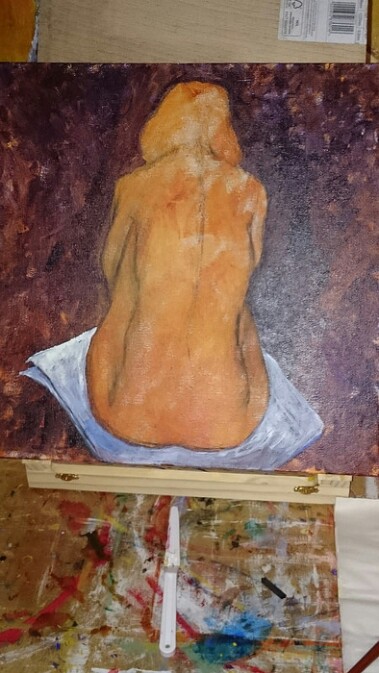 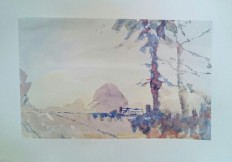 Edward Seago was a 20th century English artist, famed for his watercolours, although he used other mediums too (in art, mediums is apparently the correct plural, according to who I don’t know). Very popular with the British Royal family, which is not always a recommendation but I think he is good. We were trying to copy his faint, multi layered style, but using just sponges to apply the paint. No brush work at all. I thought the bright yellow one was just too yellow, but my wife preferred it. She said it just shouts “sunshine ” which is what we are all craving at the moment.

Not my favourite pictures, but I quite like them and they are useful practice. 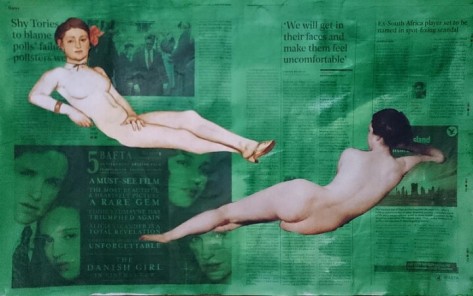 Still not sure where I am going with these two, but there is something about them that I find irresistible. They are beautiful and amazingly contemporary when you cut out their original context. Venus in particular. There is nothing to give away her age. Olympia does look a little like a victorian governess. A very little…

The ideas are germinating but still a lot to do.

First class of the year. As always with Mark Kelland’s class, we learn new techniques. The problem is applying them out of the class. Today we looked at using candle wax as a resist. Laying on bright yellow with a sponge, scribbling over it with an uncoloured candle, then laying more, darker paint over. Then drawing apples with the candle and finally sponging ordinary Parker Quink over it all, It gives an effect very like lino cut printing. You would hardly guess it is watercolour. I added a few highlights by scratching through to the paper underneath.

At the end of this term, Mark wants one picture from each of us to put in an exhibition. It will cover all of his classes, not just this one.